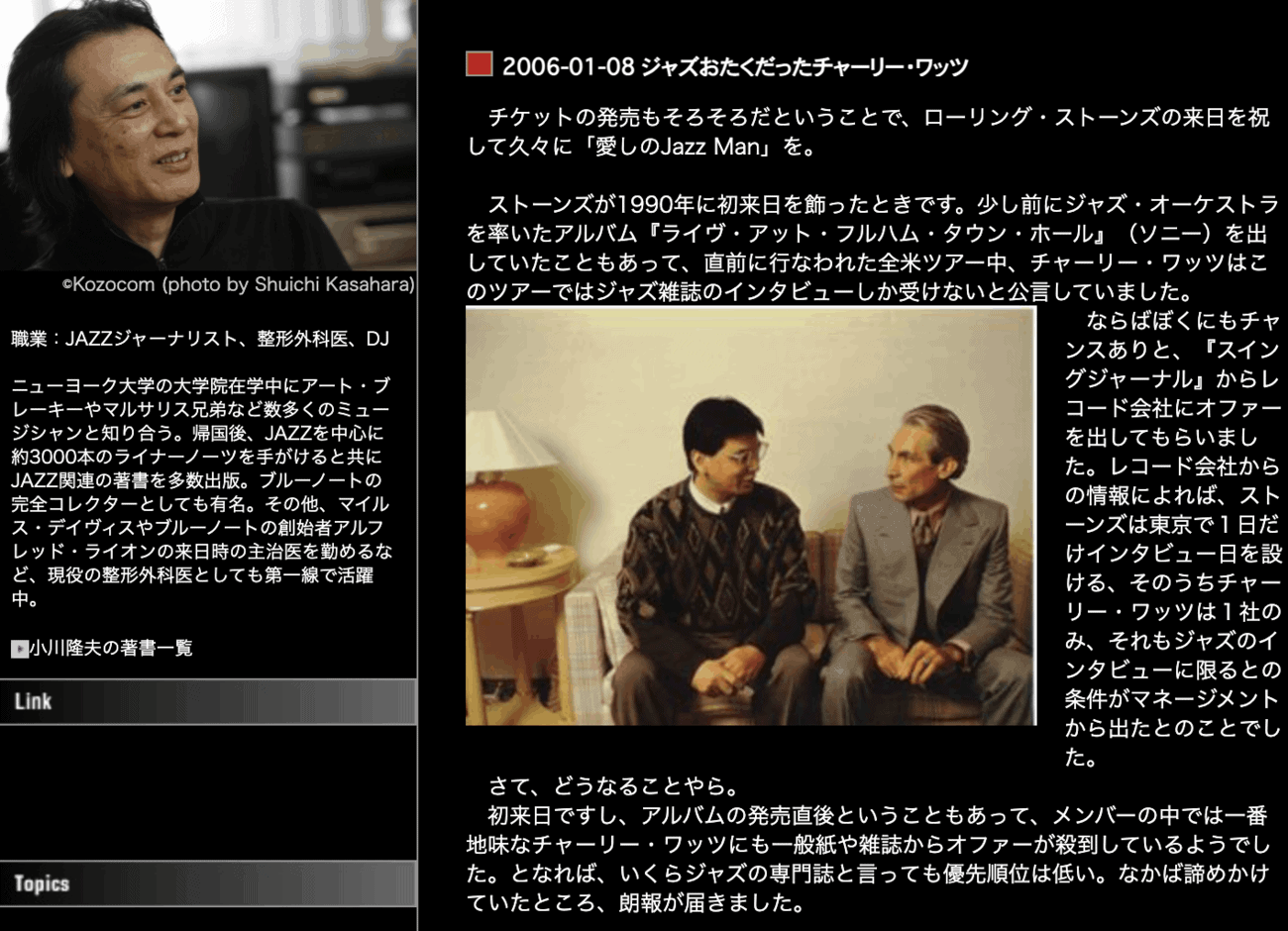 This article is taken from a Blog Post (2006, January 8th) by Takao Ogawa, a Jazz Critic.
A Jazz Geek - Charlie Watts (The Rolling Stones) By Takao Ogawa (Jazz Critic)
Now The Stones tickets are to be on sale soon, (The Rolling Stones came and performed in Japan 2006, March to April) I just want to talk about my memory of Stones relating to Jazz.
When The Rolling Stones were about to come to Japan for the 1st time in 1990, Charlie Watts was telling the press that he would not do any interview except with Jazz related topics. By hearing that, I just contacted Swing Journal (Monthly Jazz Magazine in Japan) to approach Charlie for an interview.
We were told that The Rolling Stones would have a press interview in Tokyo just one day only and Charlie stated that he would have only one press interview with Jazz related topics.
Even if Charlie was saying that an interview should be in Jazz issues, that was the 1st time that The Rolling Stones would come to Japan to perform and all the medias were going crazy to take that spot to interview them.
I waited for a reply with a slim possibility to interview him.
Finally I got a call!
To my surprise, Charlie himself chose me to have an interview!
He was saying
"When I get to Japan, I want to meet and have an interview with Mr. Takao Ogawa."
Why did he know my name?
Well, I went to see Charlie at Hotel Okura in Tokyo on the interview day. In a waiting room, their manager came and all press guys including me were asked to sign a kind of contract. Wow, I have never seen interviewers asked to sign a contract!! Haha. This is the Rolling Stones.
I waited for a while and was called. Now, my turn. I went inside and found Ron Wood with Charlie. And suddenly the door opened and Mick Jagger and Keith Richards came in as well!!
It seems that they were also on a short break at that time.
In front of me, The entire Rolling Stones were there! I felt like I was dreaming. They all shook my hands and after a short chatting, they went out.
"Are you Mr. Takao Ogawa?"
Charlie asked me and I was really astonished to hear Charlie pronounced my name in a perfect way!
"Why did you appoint me for an interview?"
I asked him.
"You are the only one Jazz critic I know in Japan. I have seen your articles in Swing Journal. You wrote many articles there right? I made up my mind that when I would come to Japan, Mr. Takao Ogawa is the one who would interview me. And I also want to be featured in Swing Journal as well."
He was a yearly subscriber of Swing Journal for many years.
Then he brought up a piece of paper and showed it to me.
He listed up many Blue Note CDs which were ONLY available in Japan at that time and told me.
"Please help me finding these CDs for me."
What an honor!
He was checking all those CDs one by one from the Swing Journal issues.
Before we even started a main topic, the agreed time for the interview - 30 minutes gone and the manager came in and told Charlie "The time is up"
But Charlie told the manager that he needs at least one more hour!
So, with the remaining one hour, we talked and talked about Jazz. In all the wonderful conversation, I still remember Charlie saying this very strongly and clearly,
"Even now, I consider myself as a Jazz drummer, just a mere Jazz drummer is in the world number one Rock'n Roll band accidentally. At home, I only play and practice Jazz drumming."
I still remember going to see The Rolling Stones in 1990 in Tokyo with my friend! back in my university days! I never knew this kind of interview was going on behind the senes and never knew the greatness of Jazz music at that time, haha. But I still love The Rolling Stones as well. by Takashi
Categories: The Behind Scene Stories Of Golden Jazz

Funky in Kichijoji, TokyoPioneer of Jazz music, Jazz Kissa in Japan by TakashiI sometimes talked about – Jazz Kissa – before.It is a Japanese style…

I love this album.Jackie McLean Jackie’s Pal PrestigeOriginally it was released in 1956. As you can see the picture on the jacket, McLean featured Bill…

I listened carefully side 1 and 2 and compared how they sound differently….and here is what I found.Side 2 – RVG STEREO side has much…