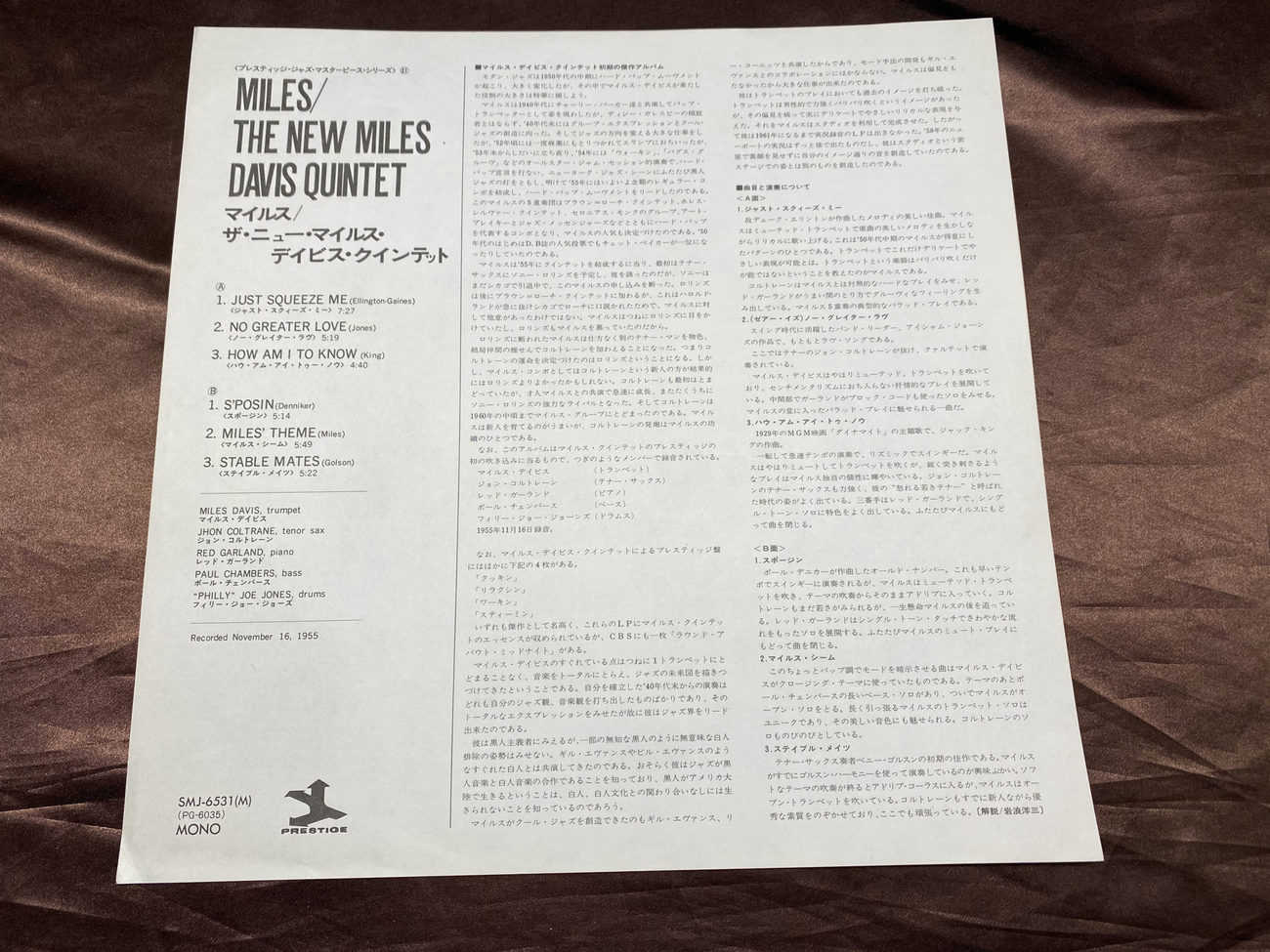 This is a liner note of Miles Davis Miles Prestige SMJ 6631 Victor Music Japan.
Sonny Rollins Refuses Miles' offer and...by Yozo Iwanami (Jazz Critic)
In the mid 50's, the Hard Bop Movement evolved and Miles Davis played a big roll in that movement.
In the 40's, Miles played with Charlie Parker's band and showed his talents but never copied the style of Dizzy Gillespie and made his own style of Cool Jazz in the late 40's.
But around 52, he fell into drugs and stayed away from the music scene. Later in 53 towards 54, he overcame the addiction and came back with the great albums like Walkin', and Bags Groove. In 1955, Miles now formed his own solid band and lead the Hard Bop Movement.
This Miles New Quintet became one of the leading Hard Bop Bands with Clifford Brown Max Roach Quintet, Horace Silver Quintet, Thelonious Monk's Group, and Art Blakey The Jazz Messengers.
In 1955, while Miles was choosing the band members, he was considering Sonny Rollins as a saxophonist and he contacted Sonny Rollins. But Sonny refused his offer because he was retired in Chicago at that time. Sonny joined Clifford Brown Max Roach Quintet just after that incident mainly because he was persuaded by Max to help him (Harold Land - Saxophonist quit suddenly and Max was in trouble at that time). Sonny did not refuse Miles's offer in bad intention. Miles always respected Sonny and Sonny too,  respected Miles.
After Sonny's refusal, Miles looked for a replacement of Sonny and he was introduced John Coltrane. Well, after all, Sonny Rollins made Coltrane's destiny. Anyway, the new face Coltrane's replacement turned out to be better than Rollins I guess.
At the beginning, Coltrane was little nervous in playing but he caught up with Miles's genius and grew rapidly. Coltrane ended up staying at Miles band up to 1960. Miles Davis is very good at finding a new young talented artist.
Obviously Miles Davis is the legend of the legends in Jazz. But with Coltrane, as far as I know, other than his talents, he is the man of efforts and pure heart in music. by Takashi
Categories: The Behind Scene Stories Of Golden Jazz

This is an interview with Sonny Rollins when he came to Japan in 2010 (at 80 years old) by NHK Japan.When I saw this interview,…

This is the liner note from the Lee Morgan Blue Note BLP 1538, King Record Japan GXK 8017. This series by King Record was first…

Welcome to the JBJ Audio Lab!!It has been a quite while since I did the last sound comparison!You know…I never obtained this reissue before…Kind Of…

This is taken from the liner notes of Dizzy Reece Progress Report Tempo Records TAP 9 – Sawano Kobo Reissue in 2008.Dream of Tony Hall…