I happened to obtain both MONO and STEREO and, both sound great, personally, I like them both. But...you maybe wondering...is that STEREO version of Toshiba -FAKE STEREO-? right? The original Blue Note issued only MONO. The session was recorded in 1957.

I also doubted...But as far as I listen to it, it doesn't sound like fake stereo at all. It sounds really good. And I made a further research. You know, I never read the insert of STEREO reissue of BLP 1568, but there, a Jazz Critic, Mr. Makoto Goto writes something like this...

This is one of the most sought out titles among Hank Mobley titles due to the scarcity and well balanced compositions of the tracks. Also, this is the debut album for Sonny Clark on Blue Note. In addition, I was urged to write something since this is the 1st and last STEREO reissue of this title, you know.

Well, with a classic Mighty Moe & Joe, the trumpet and saxophone solo parts are different form the MONO version. With Falling In Love With Love and Bags Groove, no difference between STEREO and MONO. But with Double Exposure, at the ending part, (originally AABA) there is A only in STEREO and STEREO version is 20 seconds shorter. In general, remastered STEREO version sounds better than MONO.

He uses word in Japanese, something like "REMASTERED" STEREO. It is a myth that in 1957, RVG really recorded both MONO and STEREO and never issued STEREO?

What do you think? 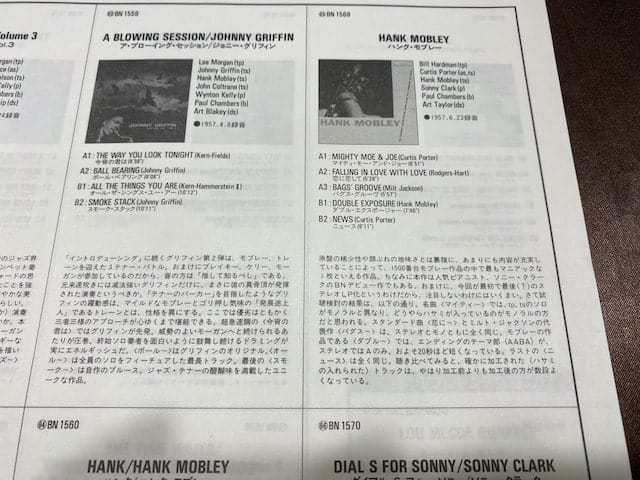 Founder and owner of JazzBluesJapan - JBJ
PrevPreviousWelcome to our Membership!
NextIn Response to Hank Mobley BLP 1568Next